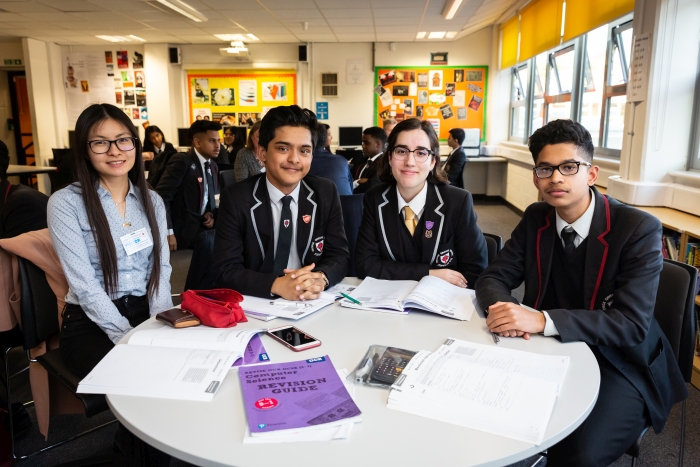 Tackling the IT skills gap through education

BCS, The Chartered Institute for IT is calling on businesses to tackle the IT skills gap by building relationships with local schools. Here, Claire Pensketh explains how IT staff at banking investment giant Morgan Stanley are mentoring pupils in a deprived area of the capital, giving a massive boost to exam results and inspiring more girls to consider a career in IT

“Some girls don’t realise what computer science is all about – they think it’s boring and it’s just for boys,” says Amy, a fifteen-year-old pupil at George Green’s secondary school on the Isle of Dogs. “Then you do these sessions and delve into stuff you’ve never heard of before and it’s so interesting. Girls need to know that it’s more than just computers and numbers.”

The ‘sessions’ Amy refers to are a homework club where mentors from a major international investment bank, Morgan Stanley, help teenagers in one of the most deprived boroughs in the country to revise for their GCSE and A level computer science exams.

Around fifteen teenagers studying for their Computer Science GCSEs are seated in small groups, each with a volunteer from the investment bank. There is a hum of intense discussion as the youngsters pore over their revision textbooks, thoughtfully quizzing the volunteers about everything from algorithms to AI.

“I don’t feel I’m teaching them, as I think I learn more here than I give,” says Joy Wang, a software engineer. A fifteen-year-old boy, Jakaria, tells Joy: “You teach us more than you think; you teach us a lot.”

Different worlds
It’s a short journey from the school to the gleaming skyscrapers in the financial heartland of Canary Wharf, where Mike Skells, a vice president from Morgan Stanley, works. He and a couple of colleagues came up with the idea of getting the company’s IT staff into schools as mentors: “We have people who do computer science as their day job and we know there’s a huge skills shortage, both as far as teachers are concerned and in the workplace.”

Morgan Stanley helps deliver results
This approach has worked well for the students. When George Green’s school ran a Computer Science GCSE course for the first time in 2015, 46% of students achieved a grade A-C. The following year, the school made a number of changes, including working with Morgan Stanley, and began to see significant improvements. In 2017, 100% of students achieved an A-C mark.

George Green’s is one of six local schools visited by mentors from the investment bank. Mike says this project is personally important to him: “They’re our neighbours. If Canary Wharf is something that they can see but don’t aspire to, then that’s a pretty sad state of affairs. We want to make a job here, or anywhere, in tech to be an obtainable goal.”

Untapped talent in diversity
English is the second language for two-thirds of George Green’s pupils, which Mike says is not a disadvantage in the world of tech: “Computer science, as a discipline, is really good at ethnic diversity. Look at my team, where the white English male is a minority. We take people from all around the world, from all different backgrounds. “If we can get someone from here to be employed with us, then they can come back and say to a school assembly ‘If I did it, you can do it’. That’s the goal. It’s great for us to get skilled people in and it’s great for positive role models here – it completes the circle.”

On average, girls make up around 20% of pupils on the computer science course. This group feels closer to 40%, which pupil Amy puts down to the approach of the mentors: “I wasn’t that confident – I didn’t really understand it,” she says, “but coming here has developed my love for computer science. In lessons you just learn the basic ideas, but the mentors go fully into details and make you want to learn more about it.”

It’s all about the experience
Jill Baker, head of George Green’s School, says it’s the enrichment of experiences that her school needs from its wealthy neighbours, not cash: “I never ask the companies for money. That, it seems to me, is not the best approach for fostering positive relationships. We’re not out there with a begging bowl; it’s about forming relationships for experiences that benefit our students.”

The hope is that volunteers will inspire the youngsters about their future careers, for instance studying computer science at university or going on to a digital apprenticeship at Morgan Stanley: “There are bright students here, as there are at many schools,” says Mike, “and this is a case of showing them this aspiration is achievable.”

The view of pupil Yahya sums it up: “Seeing people who work in computing in the real world puts it into perspective. I’m going to do A level computer science and see where I go from there.”

Plugging the digital skills gap
The digital skills gap, and concern that not enough is being done to rectify it, has long been a topic of national debate. According to government figures1, around two thirds of large companies and half of small and medium-sized enterprises in the UK are experiencing a shortage of skilled IT workers.

A recent report from the CBI2 stated that companies can play a vital part in smoothing the transition from school to work and in helping young people to achieve. Worryingly, its latest figures show a dip in the number of firms who have forged links with educational institutions.

Volunteers needed
Getting industry involved in schools is a major part of The National Centre for Computing Education (NCCE), an £84 million, government-backed initiative to upskill 8,000 computer science teachers and boost the number of young people studying the subject. BCS, The Chartered Institute for IT is a member of the consortium behind the NCCE, and one of its responsibilities is to engage industry in schools.

BCS Director of Education Julia Adamson says: “We want to encourage industry to get involved, from volunteering, running coding clubs or visiting local schools to talk about their own experiences, just like the team at Morgan Stanley is doing. These young people are our future – we all must ensure that every pupil leaves school with the knowledge and skills to thrive in the digital world that surrounds them.”
——————————————–

1 Digital Skills for the UK Economy, a report by ECORYS UK, January 2016