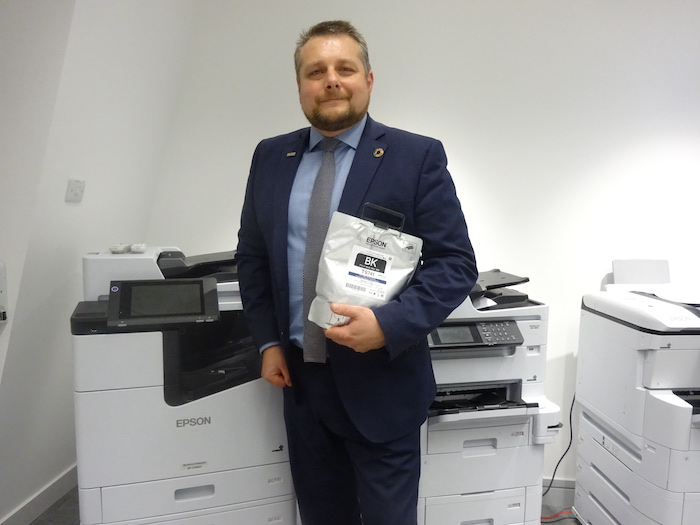 Epson printers are proof that sustainability doesn’t have to be at the cost of performance. Managed IT finds out more from Richard Wells, Head of Business Sales at Epson UK

There is little doubt that the last 12 months have seen renewed focus on sustainability as everyone has become more aware not only of our vulnerability to natural forces but also our capacity to improve the environment by our actions and perhaps even our willingness to make sacrifices for the greater good – something that politicians might want to bear in mind when they meet up at COP26 in Glasgow in November.

Richard Wells, Head of Business Sales at Epson UK, says he is already seeing the effects of greater environmental awareness in the business world, where Epson has long advocated a more sustainable approach to office printing.

As evidence, he cites more stringent energy-consumption requirements within the qualitative and commercial evaluation by NEUPC (North Eastern Universities Purchasing Consortium) for the NEPA (National Education Printer Agreement) framework through which universities and higher and further education bodies can acquire printers and managed print services.

“It was pleasing to see power consumption and consequent CO2 emissions built in by a well recognised framework provider – and built in by choice, rather than just being down to the encouragement of manufacturers like ourselves,” he said.

“NEPA told us they made the decision after their customers – the universities and colleges – said what they wanted to see in the new contracts, and we are expecting to see something similar from other framework providers. Scottish Procurement are going through an exercise now and we understand that they will have energy consumption in there; there are even rumours that it will be an element of Crown Commercial’s requirements.”

Heat-free printing
This trend clearly plays to the strengths of Epson’s heat-free inkjet printing technology, which it has been promoting as an economical, low-energy alternative to laser printers. With ever more success.

Although laser printing is still the dominant technology in the office environment in terms of printers sold, when it comes to the number of pages printed the two technologies are approaching parity.

“That’s not just because pages in the home are predominantly printed on ink devices, or because at the other end of the scale a lot of the volume printers on the transpromo and mailing side are inkjet devices. We are gaining market share in the centre, too, and expect to see quite a considerable shift over the next 12 months – because of our approach and the fact that other manufacturers seem to be getting onboard,” explained Wells.

“I understand Kyocera recently brought out a high-volume mono ink machine and see that Canon has entered the market with a range of mid-range A3 ink devices. Konica is expected to scale down its KM1 inkjet device for the office space, as is Ricoh with theirs. While the split is currently just under the 50:50 for total pages printed, within the next 2 to 3-year period, we think it will tip over and more pages will be printed on inkjet devices than on laser.”

Wells emphasises that people are making the switch for commercial reasons as much as for environmental ones, pointing out that Epson devices are not just more sustainable but also economical and reliable – qualities that still trump sustainability, even if the latter has moved from the fifth most important buying criterion to third equal with security.

“At the end of the day, people don’t want their printers to let them down. Because we use heat-free ink technology, as opposed to the thermal ink technology used by some manufacturers, we don’t have to heat up anything in any part of the machine. This means the reliability of our parts – of which there are very few in our machines – is that much greater. Our piezo head, unlike a thermal head, isn’t exposed to constant heating up and cooling down, so we are able to deliver really long-life consumables and use long-life components. It is not unusual to have conversations with dealers who have never visited a machine of ours because it has never had a problem.”

He adds that a heat-free printing process enables Epson devices to be used in inhospitable environments without the risk of paper jams and misfeeds that can occur on laser machines when damp paper comes into contact with a hot fuser unit and curls more than it should.

“We don’t have those problems because there is no heat. We have put machines into some very testing environments, including an oil pipeline in the rural Scottish highlands, where the temperature is not great and the humidity is very, very high. The site is not managed very often, but the machine just keeps performing.”

Expanded range
To date, Epson has won over business and public sector buyers with a small number of devices. However, Wells says it is now starting to expand its range, mainly to satisfy the conventions of the market and the demand of its resellers.

“So, what we did initially was to focus on the number of pages people print. In the UK, the average print job in any business is less than 4 pages. In Epson, it is 3.2 pages, with two thirds of print jobs being just one page. It doesn’t matter if your machine is 30, 40, 50 or even 200 pages per minute; what’s important is how long it takes for the first page to be printed. Every single one of our office machines, including our 100ppm device, prints its first page out in under 6 seconds. On our 25ppm machine, you would have to have a print job of 18 pages or more to notice any speed disadvantage against a laser printer.”

In a change of tack, Epson is planning, over the next 12 to 18 months, to add additional machines to its mid-range offering by scaling down the fixed Linejet heads in its Enterprise range of 60, 75 and 100ppm machines.

“I think we are winning the argument that for the purposes of efficiency and productivity you don’t necessarily need a higher speed, but it is sometimes easier not to have that conversation. If you are hung up on the idea that you need a 40ppm machine because you had a 40ppm one before, then we will be able to deliver that,” said Wells.

Long-life consumables
Another aspect of Epson printers that has an impact on their carbon footprint is the ink itself and especially how it is delivered – in large ink packs with page yields of up to 86,000 pages that, as well as producing up to 96% fewer used consumables than laser printers, require fewer deliveries of replacement supplies over the course of a printer’s lifecycle.

For small office and home office users, Epson has introduced what it calls the Just Add Paper option, which bundles new printers with enough ink to last three years, so that over that period there is no need for additional deliveries and packaging.

Continued improvement
Tackling the broader impact of printing in such ways is important for Epson as it continues to reduce the environmental impact of its devices.

“We are constantly looking at how we can drive things down further – how we can slice very small elements off what are already very small elements. To put this in perspective, at trade shows we would connect a bicycle to a printer that people could power and get a print from just by pedalling. It is pretty difficult to shave much off power consumption when you are that far ahead of the curve, so we will look at other aspects to see how we can improve on those,” said Wells.

One of these is the recycling of paper through its PaperLab recycling system, which takes in used printer paper at one end and outputs clean A4 sheets for re-use at the other. It is currently working on scaling down the technology, potentially into devices not much larger than a copier, and within the next two or three years hopes to bring out a version that turns waste paper into packaging material.

Sustainable presentations
Meanwhile, Epson is applying the same inventiveness to other areas of its business portfolio, including Moverio virtual reality glasses, which enable engineers to support devices remotely without the need to travel to distant sites, and projection.

“Similar to our crusade to get heat-free printers into the office space, I am absolutely focused on trying to deliver interactivity to classrooms through the medium of projection rather than flat panels. You can create a much larger image with a projector than you can through a panel and would have to spend many times the cost of a projector on a flat panel or a video wall to deliver an image of the same size. We think that’s important because with the return to school and socially distant classes some pupils are going to be further from the front of the class than they have ever been.

“If you are looking at a 65in screen – the typical panel size sold into schools – it is unlikely that pupils at the sides and the back of the class will be able to see everything. Projecting at up to 120 inches – the typical projection size of our school projectors – is more inclusive. And, if you are using areas such as the assembly hall for teaching so that you can keep more people in the class, our high brightness projectors go up to 500 inches in size.

“You can get that interactive experience through projection without having a very heavy, very expensive and, at end of life, harder to dispose of product containing a lot of glass, metal and plastic,” explained Wells.

Epson’s projectors and printers are proof that you can square the circle – that you can deliver both efficiency improvements and environmental benefits.