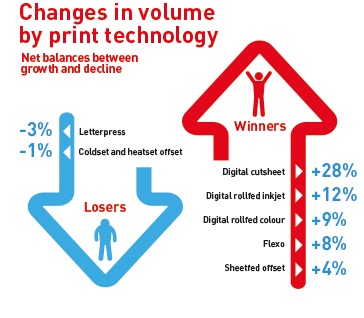 Even with tighter margins, falling prices and an incomplete recovery from the 2008 fiancial crisis, printers are increasingly optimistic about their prospects, according to the third drupa Global Trends Report (2016).

When asked, how they thought their fiancial situation would change in 2016, 50% thought it would get better compared to 6% who thought it would deteriorate – a positive balance of 44%. Optimism is greatest in Africa, Australia/ Oceania, Middle East and Asia and in commercial and industrial printing.

Digital printing technologies are showing the fastest growth (28% on average), but sheet-fed offset lithography is also growing, particularly in publishing, with a net positive growth of 7%, and in packaging (+12%).

Digital print now makes up 25% or more of turnover in one third (35%) of commercial printers.

Printers and suppliers both cited strong competition as the biggest constraint to growth. Lack of sales was almost as big a factor, caused by the diffiulty in fiding new customers (58%) or good sales staff (35%).