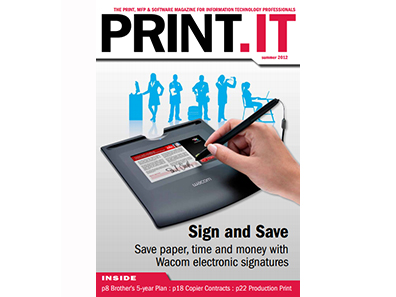 Mobile workers have one less reason to print

Cloud desktop services provider Cortado (formerly ThinPrint) has introduced a new driver that allows mobile workers to print to tablets and smartphones instead of paper, making it easier than ever to access and work on business documents any time, anywhere and on any device. The free Print-to-ePaper driver allows 3.5 million Cortado ThinPrint users in 15,000 organisations worldwide, with just one click, to create a PDF that is automatically delivered to their tablet computer or smartphone.

Because users must create a free cloud desktop account to use the feature, Print-to-ePaper will also automatically save PDFs to a user’s cloud desktop from where they can be accessed via the free Cortado Workplace app, edited, emailed and printed. Henning Volkmer, CEO of Cortado Inc., said: “The addition of Print-to-ePaper is a simple way to reduce printing costs by replacing paper printouts.

Even more useful for end-users is the ability to travel light: essential documents such as travel details, presentations or customised contracts are now clearly arranged and easily accessible at any time on their smartphone or tablet.” Print-to-ePaper is based on Cortado’s free cloud desktop solution, Cortado Workplace, already used by over a quarter of a million iPhone, iPad, Android and BlackBerry users and now, following the launch of an HTML5 version, PC and Mac users.

The free driver is provided with new ThinPrint Server Engine installations and is available to existing users as a free feature install.