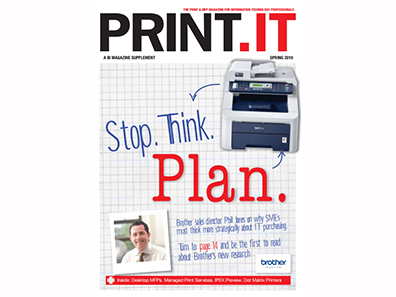 quarter of 2009 after six consecutive quarters of decline. TheIDC Worldwide Quar terly Hardcopy Peripherals Trackershows that in Q4 2009 unit shipments (34 million) were 3.6% higher than in the same period in 2008 – the first yearon-year increase since the second quarter of 2008.

However, in terms of shipment value the market continued to decline, albeit at its slowest rate (4.6%) since the third quarter of 2008. The best performing products were mono laser MFPs, with a 9.3% yearon-year increase in unit shipments, followed by colour laser MFPs with 8% growth and colour inkjet MFPs with 6% growth.

Despite the turnaround in Q4, 2009 was a terrible year for the printer industry. Gartner figures show that combined printer, copier and multifunctional product (MFP) shipments in Europe, the Middle East and Africa (EMEA) totalled 39.6 million units in 2009, a decline of 17.8% compared to 2008. End-user spending also fell, by 21% from 14.4 billion euros in 2008 to 11.3 billion euros as a result of tighter credit controls by banks and cuts in IT spending by businesses and consumers.

Sharon McNee, principal analyst at Gartner, does not expect the market in EMEA to return to growth this year. “The printer, copier and MFP market is competing for scarce disposable income, coupled with a relatively low demand from businesses and consumers to replace existing devices,” she said. IDC is more optimistic. It is predicting a compound annual growth rate (CAGR) of 7.6% from 2010-2014, but points out that this must be seen in the context of last year’s low base of activity when overall HCP shipments fell 15.1% from their 2008 peak. It does not expect shipment volume in EMEA to reach 2008 levels until 2011. IDC expects total MFP laser shipments as a share of total laser shipments to rise from 35.8% to 47.2% over the forecast period, with colour laser MFP shipments almost doubling from 1.5 million units in 2009 to 2.9 million in 2014. Inkjet MFPs are also expected to grow strongly with a CAGR of 7.7%.

In the single function laser printer market, colour sales will enjoy a CAGR of 13.6%, though mono laser printers will remain the dominant printer type in offices. By 2014 monochrome laser printer shipments in EMEA are expected to total 8.4 million units, compared with 2.9 million for colour laser printers.