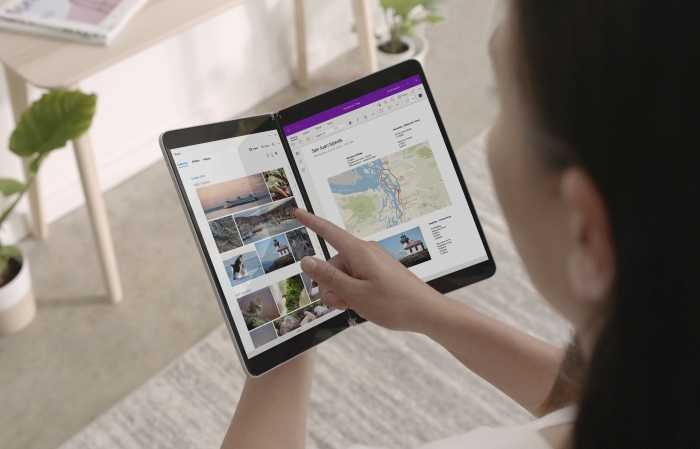 Announced at the launch of Microsoft’s new Surface computers (see below), the Surface Neo and Surface Duo are due to be launched in time for 2020’s Holiday season.

The smaller, more mobile form factors are designed to replace the handful of electronic devices – notebooks, tablets, smartphones – that mobile workers typically carry to perform the specific tasks for which each is best suited.

Microsoft believes that having a single device with two screens will aid productivity and concentration by removing the need for multi-tasking workers to switch between apps on a single screen or between different devices.

As the launch press release states: ‘Imagine being able to take a Microsoft Teams call on one screen and look something up on the web or view a document on another. Switching seamlessly between tasks, without having to switch between devices.’

Surface Neo features two 9 inch screens connected by a 360-degree hinge that, when fully opened, creates a full-size 13 inch display, while the pocket-sized Surface Duo has two 5.6-inch screens that unfold to 8.3 inches. The latter can also be used to make phone calls.

In the meantime, Microsoft is bringing out four new Surface devices offering the benefits of a tablet and a laptop. These include the Surface Laptop 3, ‘the perfect everyday laptop’, now twice as fast, packed full of new features and available in two sizes (13.5 inches and 15 inches); the thin, light, versatile Surface Pro 7 2-in-1 device; and the ultra-mobile, always connected Surface Pro X, featuring removable SSDs.