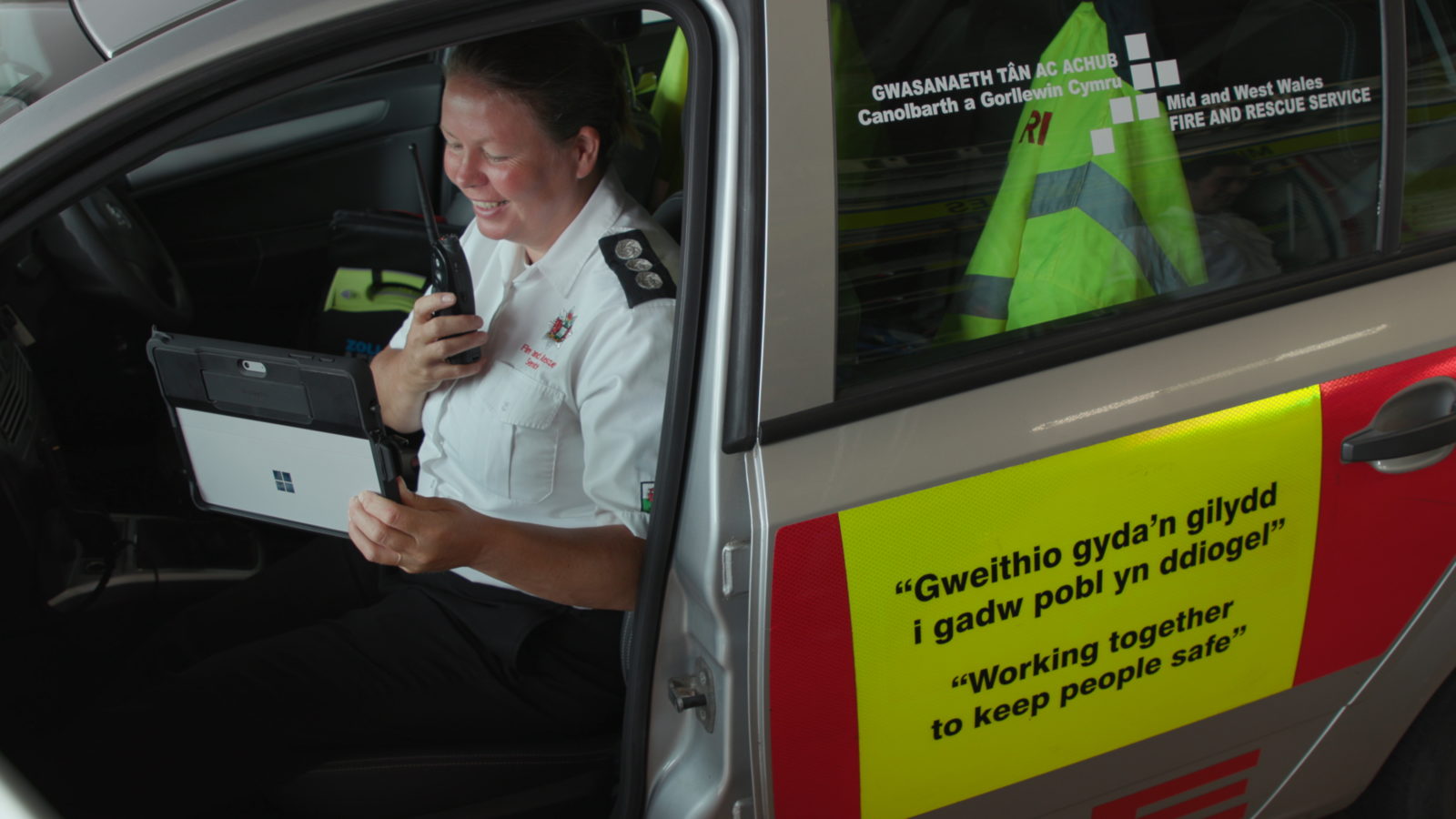 Holograms, tablets and Teams – one of the largest fire services in the UK is going digital

One the largest fire and rescue services in the UK is going digital, by using Microsoft Surface, M365 and Teams to help them respond to emergencies and train new recruits.

Mid and West Wales Fire and Rescue Service, which looks after approximately 12,000 square kilometres of Wales, is giving officers Surface Go devices so they can view information about specific vehicles as they are travelling to road traffic collisions.

This means that when they get to the scene of the incident, they can tell firefighters the best places to cut vehicles to free trapped passengers and how to disable undeployed airbags to avoid injury. They can also see live information about the incident, which can be shared instantly with colleagues.

Microsoft’s technology will be used alongside the Mobile Data Terminals found in all fire appliances, which allow firefighters to stay in contact with their control centre but can’t be removed from the vehicle.

Chris Davies, Chief Fire Officer at Mid and West Wales Fire and Rescue Service, said: “By using Surface Go, our officers can now see all the safety features of a vehicle involved in an accident, wherever they are. This gives firefighters more information about the situation as they safely extricate casualties.

“The use of real-time data and Power BI has transformed what we do. Whether that’s information from an emergency or a live feed from a drone searching for someone injured on a mountain, information allows our staff to understand situations in more detail.

“Technology is also helping us with more straightforward activities, such as using Teams to hold training sessions for firefighters across Wales.”

With 1,400 staff employed in 58 fire stations across Carmarthenshire, Ceredigion, Neath Port Talbot, Pembrokeshire, Powys and Swansea, arranging for everyone to be in the same place for training is difficult.

With few motorways in Wales, firefighters can spend up to six hours travelling to a training session that lasts an hour or two. Davies has found Teams to be a far more efficient – and safer – solution.

“I’ve been encouraging more staff to conduct remote meetings, because we don’t need to ask all the officers to travel to headquarters, for example,” Davies said. “We can run meetings on Teams and it’s far more effective. People are much more engaged. There’s also less risk to our staff when they’re on the road because they haven’t had to get up very early to travel somewhere.

“It’s simple uses of technology like that which are really changing how our service operates to meet the needs of today’s world.”

Davies, who took over as Chief Fire Officer six years ago, is now looking to build on the success the service has had with Teams and Surface. He wants to use Microsoft HoloLens to create life-sized holograms of some of the buildings in mid and west Wales, which firefighters can look at and interact with during training at their station or on the way to an emergency. This will allow them to understand potential risks, identify safe routes through those buildings, and learn the location of hydrants and sprinklers.

Currently, firefighters look at single line drawings of buildings on a computer screen.

HoloLens could also be used to train officers in how to respond to emergencies at Wales’ oil refineries.

“We have a number of oil refineries in the area, and historically we’ve always trained on those sites,” Davies said. “What HoloLens will enable us to do is actually put Incident Commanders into those scenarios, in an almost live experience but in a safe environment.

“I firmly believe this is going to change the way that we train and maintain the competencies of our firefighters. My vision of what is possible has been completely blown away by Microsoft.”

It’s the latest example of how Microsoft is helping the public sector to use technology to improve how employees work.

Last year, Wales became one of the first countries in the world to give schools free access to Microsoft 365. The Welsh Government paid for all 1,521 “maintained” schools to have access to programs such as Word, Excel and PowerPoint, in a bid to boost the use of technology among pupils and reduce costs for families and headteachers.

Meanwhile, an agreement struck between NHSX, NHS Digital and Microsoft in June will save the NHS hundreds of millions of pounds and enable all eligible organisations in England to access Microsoft 365 digital tools.

Chris Perkins, General Manager of Public Sector at Microsoft UK, said: “There has never been a more important time for companies and organisations to use technology that helps staff collaborate, communicate and gain insight into the world around them. This is even more critical when those people are employed by our vital public services, which work tirelessly to keep us all safe and well.

“Mid and West Wales Fire and Rescue Service is adopting technology at scale, allowing firefighters and officers to create a network of information that can be shared and acted upon. It is a fantastic example of how placing cutting-edge technology in the hands of skilled people can lead to ground breaking solutions.”