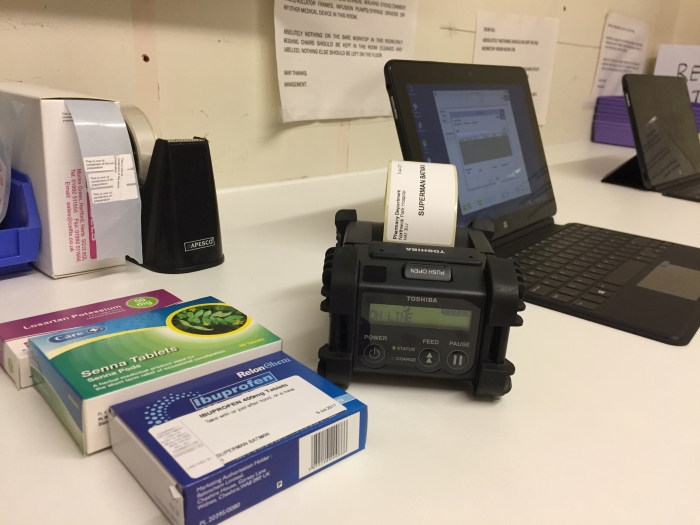 Designed by the British architect John Weeks, Northwick Park Hospital was opened by Queen Elizabeth II in 1970 to serve people in and around the London Borough of Brent. Now part of the London North West Healthcare NHS Trust, it provides a full range of services from the same site as the British Olympic Association’s Olympic Medical Institute.

Like other NHS organisations, Northwick Park Hospital is implementing changes recommended by Lord Carter of Coles in his 2016 report Operational productivity and performance in English NHS acute hospitals.

In the report, Lord Carter suggests that the NHS could save at least £800 million through the transformation of hospital pharmacy services and medicines optimisation, to which end the hospital has introduced a Hospital Pharmacy Transformation Programme (HPTP) covering many areas of activity, including patient discharges.

Need for speed
Traditionally, a doctor will inform a patient they are being discharged on his or her morning round, after which they will write up the discharge letter and a prescription for medicines To Take Away (TTA).

The TTA will be screened by a pharmacist, who will then forward it to be labelled, dispensed and checked in the main dispensary. Once checked, the medicines are delivered by porters at 12:00, 14:00, 16:00 and 18:00. This means that a patient’s TTA could be until 14:00.

Only when they are in receipt of their TTA can a patient be physically discharged and the bed made available for someone else.

Principal Pharmacy Technician Kristi Anderson felt that there was scope to speed up this process and, in doing so, reduce the problem of bed-blocking. “Labelling and dispensing in the main dispensary was proving to be a laborious and time-consuming process due to the sheer volume of work, the work space and number of staff. It relies on excellent documentation and communication and medication being transferred from one location to another. We knew we needed to streamline and improve these processes,” she said.

After discussing her requirements with Toshiba TEC, Anderson designed a system that enabled TTAs to be screened, labelled, dispensed and checked on the ward near to the patient’s bedside, rather than in the main dispensary.

This process has a number of benefits:

Patients can be discharged faster;

Ward beds can be made available sooner;

The repatriation risk of returning the correct medicine to the correct patient is reduced;

Pressure is taken off the overworked and overcrowded main dispensary;

The patient experience can be improved; and

Patients can be counselled on their medicines by a member of the pharmacy team – helping to achieve a Trust target to counsel 70% of patients.

Big savings
The results of the two-week trial on three wards (two acute wards and one medical ward) were extremely positive, with the DFD team dispensing TTAs on the wards well within their one-hour target, saving an average of 126 minutes each time a patient was discharged.

After the trial, Anderson successfully applied for a grant from the London North West Healthcare NHS Trust Charitable Funds to buy six Toshiba B-EP2 Mobile Printers, plus e-readers and one mobile cart with the intention of extending the process to other wards.

So far, she has extended bedside DFD processes to a total of 11 wards (with more to follow) and opened a satellite pharmacy on one of the wards to store medicines, bringing signifcant benefts to Northwick Park Hospital and its patients.

“We have identified an increased level of patient satisfaction, as they are able to leave hospital sooner,” explained Anderson. “Compliance has potentially been improved, as a member of the pharmacy team is able to run through the patient’s medications with them on discharge, giving the patient the opportunity to highlight any problems before they go home. In addition, it has improved work?ow within the pharmacy department and reduced the possibility of errors, as well as saving precious nursing time, as nurses don’t need to go to the pharmacy to collect urgent TTAs.”

She added: “The use of Toshiba B-EP2 Mobile Printers has highlighted that there is a ready-made solution available that can drastically reduce the amount of time patients have to wait to receive their take-home medicines. I certainly believe that other NHS Trust hospitals should initiate a similar programme of improvement and would highly recommend Toshiba TEC’s products and services.”