A two-in-one laptop that lets people pull out and click in new parts as they progress has been released worldwide.

The Kano PC is a two-in-one device that is designed to open up technology, reduce the number of devices thrown away, and empower children and adults to learn at their own pace.

According to UK government figures from 2015, schools spend more than £900m a year on education technology, while the UN has found that computers and IT produce 3.5 million tons of electronic waste globally every year. In the US, schools spend an estimated $3.6 billion on new computers that could simply be repaired.

The Kano PC is transparent, so people can see how it operates; its status lights reveal the data flow within; key parts can be disconnected and replaced with new ones, increasing the lifetime of the device.

It runs Windows 10, is more durable, powerful and faster than many rival computers, and at $299.99 it’s often cheaper, too.

Alex Klein, Co-founder and Chief Executive of Kano, said: “Our goal is to create affordable, powerful computers that demystify technology. This is great news for schools that need to upgrade and repair their laptops, for economies in recovery, and for those at home, in need of new and well-designed tools.“

Kano is also releasing a camera, headphones and mouse for the PC that can be built and easily repaired with new parts. These come with creative software projects, suggested when users of the Kano PC click on the Windows 10 Start Menu. Computer science combines with imagery, geometry and music to bring disparate disciplines together. Tutorial videos on topics such as coding, design and 3D modelling come loaded inside the device, and a special curriculum is being made for teachers. The PC runs a suite of Windows 10 apps, such as How Computers Work, Kano Code and Make Art.

As Kano’s PC runs Windows 10, privacy and family safety tools come as standard, enabling families to have full transparency into how the computer is being used. 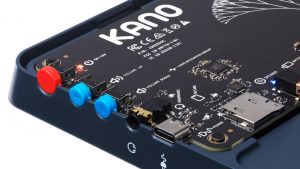 The company has worked with thousands of people worldwide as it developed the PC, and a year case study at three Tower Hamlets Schools in London showed large improvements in students’ creative confidence and computing capabilities. The tools have empowered Syrian refugees and low-income communities in the US, where the product is also launching today.

The Kano PC is now available for order on the Kano website and at Microsoft Stores online.

Its release comes as the company announces a new partnership with Microsoft.

“The Education sector is undergoing massive change enabled by technology, and our collaboration with Kano is truly advancing the vision of “technology for all,” said Jordan Chrysafidis, General Manager, Worldwide Education Device Sales, Microsoft. “Together we are delivering high quality, accessible and affordable Windows based devices, combined with customized curriculum that teaches design, coding, 3d modelling and more, that enables Kano users to become digital creators.”